Melanomas of the Skin and Toes

What are melanocytes and what is a melanoma? 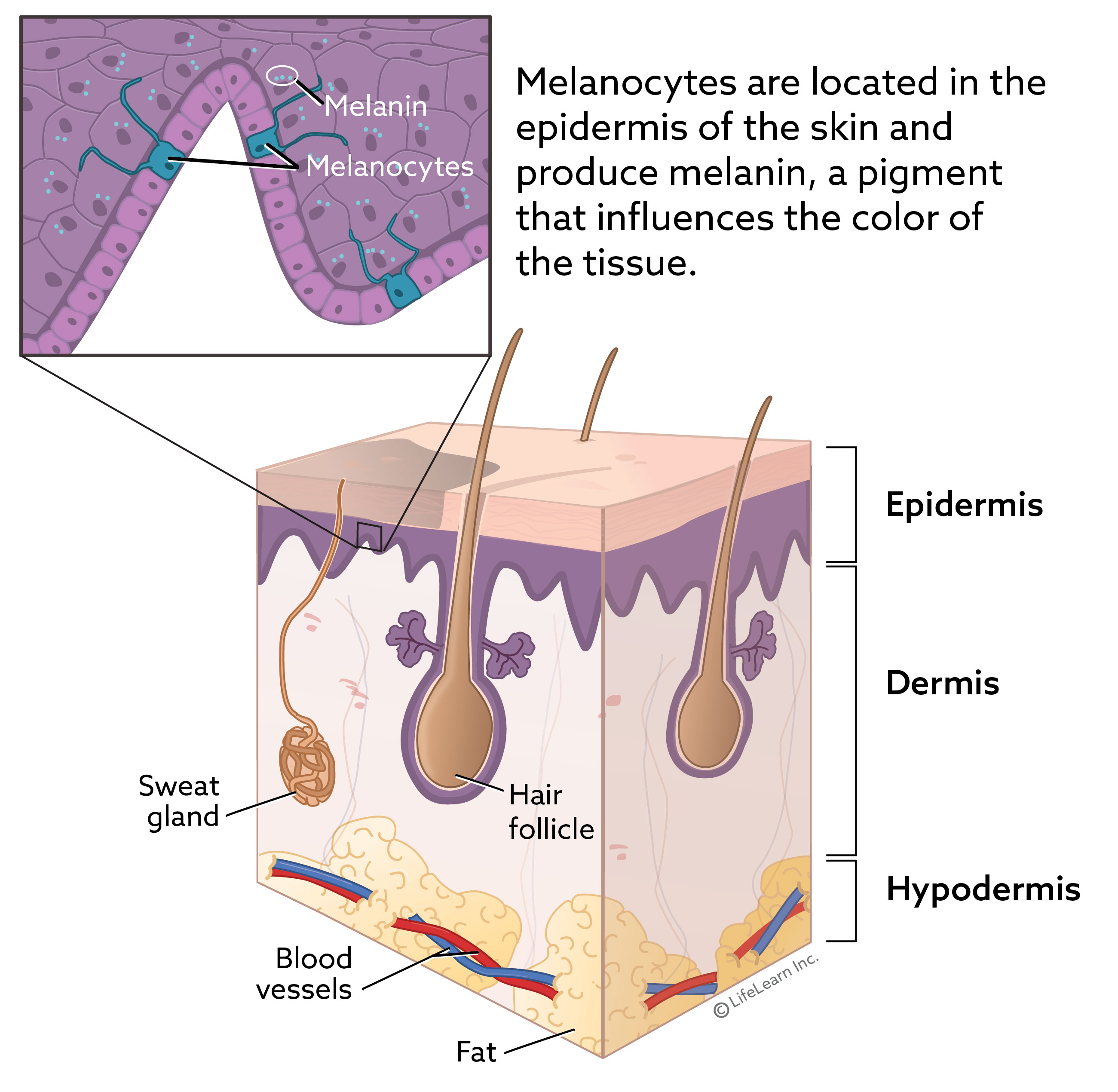 Melanocytes are cells that produce a pigment called melanin. They are found in many parts of the body where there is pigment, particularly skin, hair, and eyes. A melanoma is an abnormal production of melanocytes in a dysregulated manner that forms a nodule, mass, or other form of lesion.

What causes this cancer?

The reason why a particular pet may develop this, or any cancer, is not straightforward. Very few tumors or cancers have a single known cause. Most seem to be caused by a complex mix of risk factors, some environmental and some genetic or hereditary.

Intense exposure to ultraviolet light (frequent tanning, working outdoors, etc.) has been implicated in melanomas in people. Given that the majority of our pets have a lot of hair, light exposure is less likely to play a role in melanomas in pets. Overall, the potential causes of melanoma in pets are not well described, though there may be a genetic relationship in those that develop melanomas.

What are the clinical signs of melanoma tumors?

Melanomas of the skin may develop anywhere on the body. They can range in size and be pigmented (black) or non-pigmented. This form of melanoma is not typically bothersome, although it can be if it grows in an area such as the armpit or between the legs.

Toe (digit) melanomas, however, can be much more painful and concerning for your pet's health. Melanomas represent almost 25% of digital (toe) tumors in dogs and may cause underlying destruction of the bony parts of the toe, causing significant pain and/or swelling. This may cause your pet to excessively lick or chew the affected toe and may even cause lameness.

"Toe melanomas, however, can be much more painful and concerning for your pet's health."

Digit melanomas also occur in cats but are considered one of the rarer tumors of the toes.

How is this cancer diagnosed?

Suspicion of this tumor can be based on a pigmented (colored) mass on the skin or toes. Given that melanocytes produce melanin (black pigment), the masses are often black in color. However, there is a type of melanoma, called an amelanotic melanoma that does not produce pigment; not all melanomas are pigmented.

"However, there is a type of melanoma, called an amelanotic melanoma that does not produce pigment; not all melanomas are pigmented."

indicate a melanoma. Biopsy, or taking a larger portion of the tumor (or removing the entire tumor), may be recommended. A veterinary pathologist will then examine the tissue under a microscope and make a diagnosis. The diagnosis of melanoma is not always straightforward and can be complex.

How does this cancer typically progress?

Melanomas that affect the hair-covered areas of the skin are less likely to spread to other areas of the body (metastasis). The information from the biopsy is very important; it helps to determine the likelihood of spread.

Melanomas of the toe have a more aggressive progression. Approximately 70% of dogs will have notable spread at some point during their disease. Nearly 30% of dogs have evidence of spread at the time of diagnosis.

In any case of melanoma (and particularly the toe form), staging is highly recommended. Staging is the process of determining how much cancer is in the body and where it is located. This may include bloodwork, urinalysis, X-rays of the toes, foot and lungs, and abdominal ultrasound. If any lymph nodes appear to be affected (enlarged), samples may be taken to determine if the tumor has spread to them, or possibly further.

What are the treatments for this type of tumor?

Melanoma of the skin is typically treated surgically. It is always recommended to send the tissues that are removed to a veterinary pathologist for histopathology, especially to review the margins. Using a microscope, examination of the border between tumor tissue and healthy tissue can indicate whether any cancerous cells have been left behind. If cells have been left, then a second surgery and/or radiation therapy may be discussed.

Typically, toe melanomas are also treated surgically. This may include a toe amputation that could involve more than one toe. If evidence of spread has been found during staging (such as to a local lymph node on the affected leg), then the lymph node may be removed as well, and chemotherapy or other therapies may be considered. Radiation may be considered in cases of digital melanoma when cells have been left behind.

Immunotherapy has also been described in dogs with melanoma, though opinions vary on its clinical benefit. A melanoma vaccine is available, which may be discussed with you in conjunction with the therapies mentioned above. This vaccine is not a preventive but trains your dog's immune system to recognize the melanoma's proteins as a threat and fight the tumor cells.

Because digital melanoma can cause significant pain, pain medications should be considered and discussed with your veterinarian.

Is there anything else I should know?

Your pet should not be allowed to lick or chew any of the lesions. Licking and chewing can cause secondary infection or further pain/discomfort. The role of UV-light in generating melanomas in dogs and cats is still not entirely known, but it is important to avoid excessive bouts of sun exposure.

© Copyright 2018 LifeLearn Inc. Used and/or modified with permission under license.